I have only been suffering from all the wonderful things my Chiari caused for 1 year, but that 1 year was enough for me to know that I would do anything to possibly give me relief. I was only give about a 50% chance of a 100% improvement, but I told my NS that even if I only improved 50% I would still be better than I am now. So he agreed to do the surgery. Everything went well and I had a lot of pain the first few days, but after that each day was better except for day 10. I thought something was wrong. I woke up in so much pain that I thought for sure I had meningitis. It took several people telling me that I will have ups and downs for awhile to finally convince me that it was one of those bad days. Today was the best day I have had yet. For the 1st time in a year I experienced what it felt like to be cold. It was wonderful to have to ask my hubby to get me a jacket. My heartaches have also changed. I don't feel the pressure in my head like I did prior to surgery. Other symptoms that are improving but not completely better are my memory loss. I can actually remember a conversation I had the day before. My shaking has also improved tons. I can now focus on something without my hands starting to shake really hard. I honestly feel like this surgery was the miracle I have been asking for for months. God answered my prayers and if anyone was to ask me if I would do it again I would say yes without any hesitation!!! Below is a picture walk of my beautiful head from day 1 to day 12.

When I woke up I was in a lot of pain. I had asked for a pain pump and dilaudid. It took a while but finally we added 100mg of Nucynta on top of the pump and my pain was so much better. The one thing that shocked me the most were the muscle spasms. I knew I would have them, but OMG they freaking suck!!! This Picture was taken just a few hours after I arrived to the ICU. 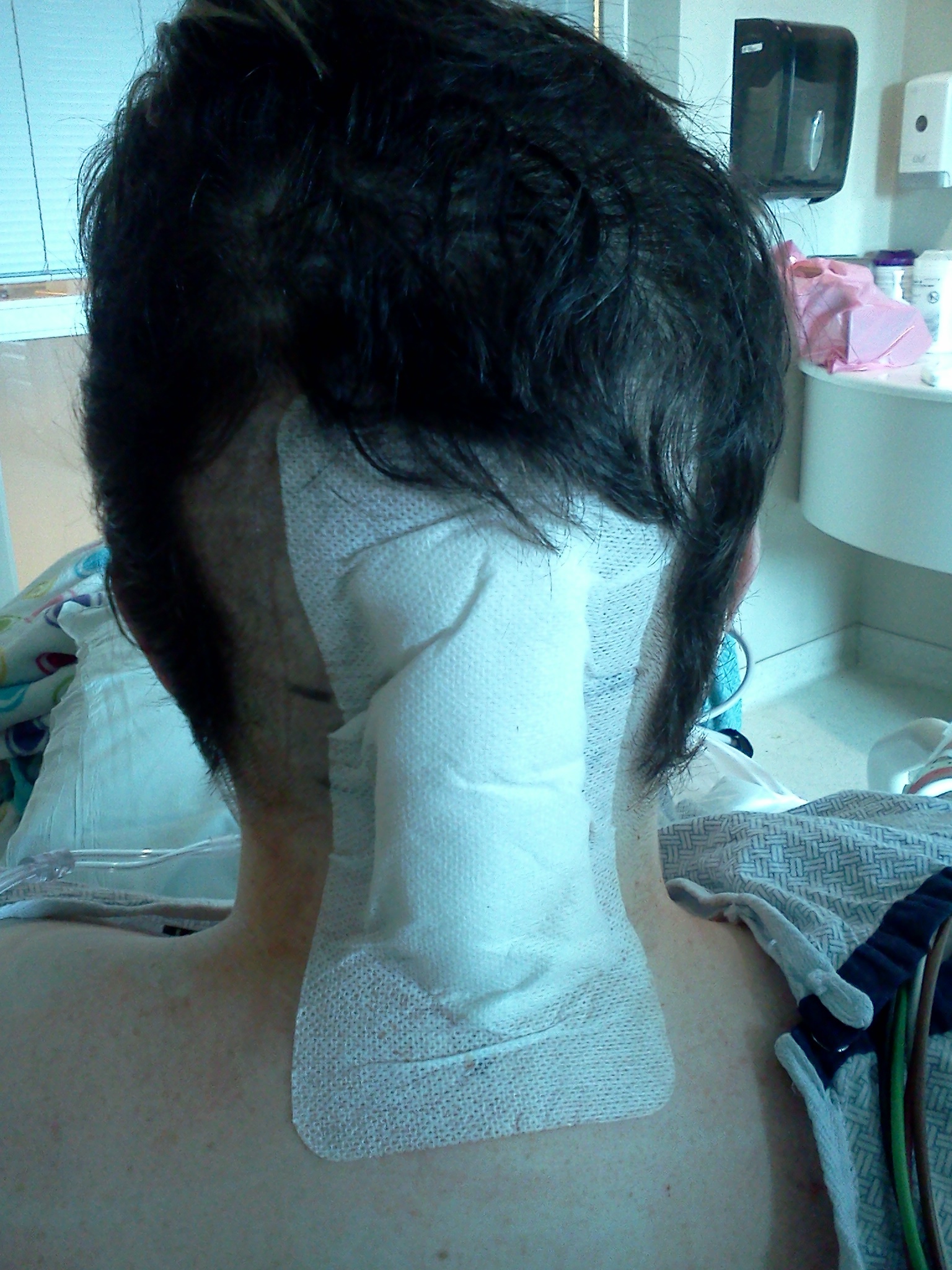 After 24hrs in the ICU I was moved to the neuro floor. I continued the pump for about 24 more hours and then I was switched to oral meds because my IV infiltrated. My right hand and arm blew up to about 5x it's normal size. I still needed to have an IV, so about 8 pokes and several blown veins later they finally got a new IV in, but I opted to try and just do oral meds before just going right back to the pump. It was tricky but I finally found a regiment of Nucynta, Roxycodone, Flexeril and Fioricet to keep my pain tolerable. I will be honest though, it was never below a 5 until I went home. This picture was taken on day 4. I had a reaction to the bandage they had placed, so I was so thankful to get it taken off. I itched so bad. Wow that's an awesome hair-do!!! 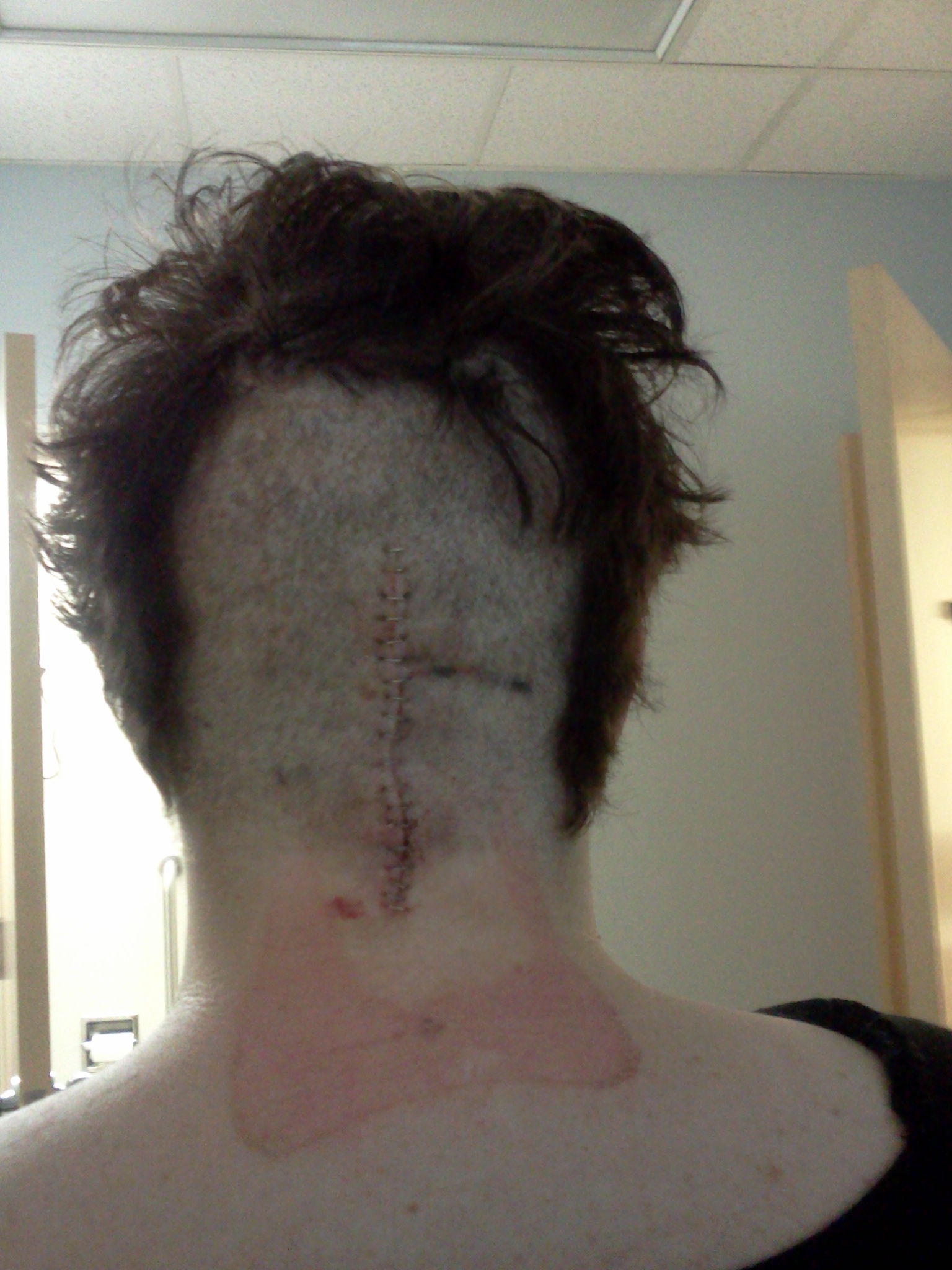 I was discharged on day 5. It was so nice to be able to go home! Here is a pic just after I had showered. I can already see a difference! 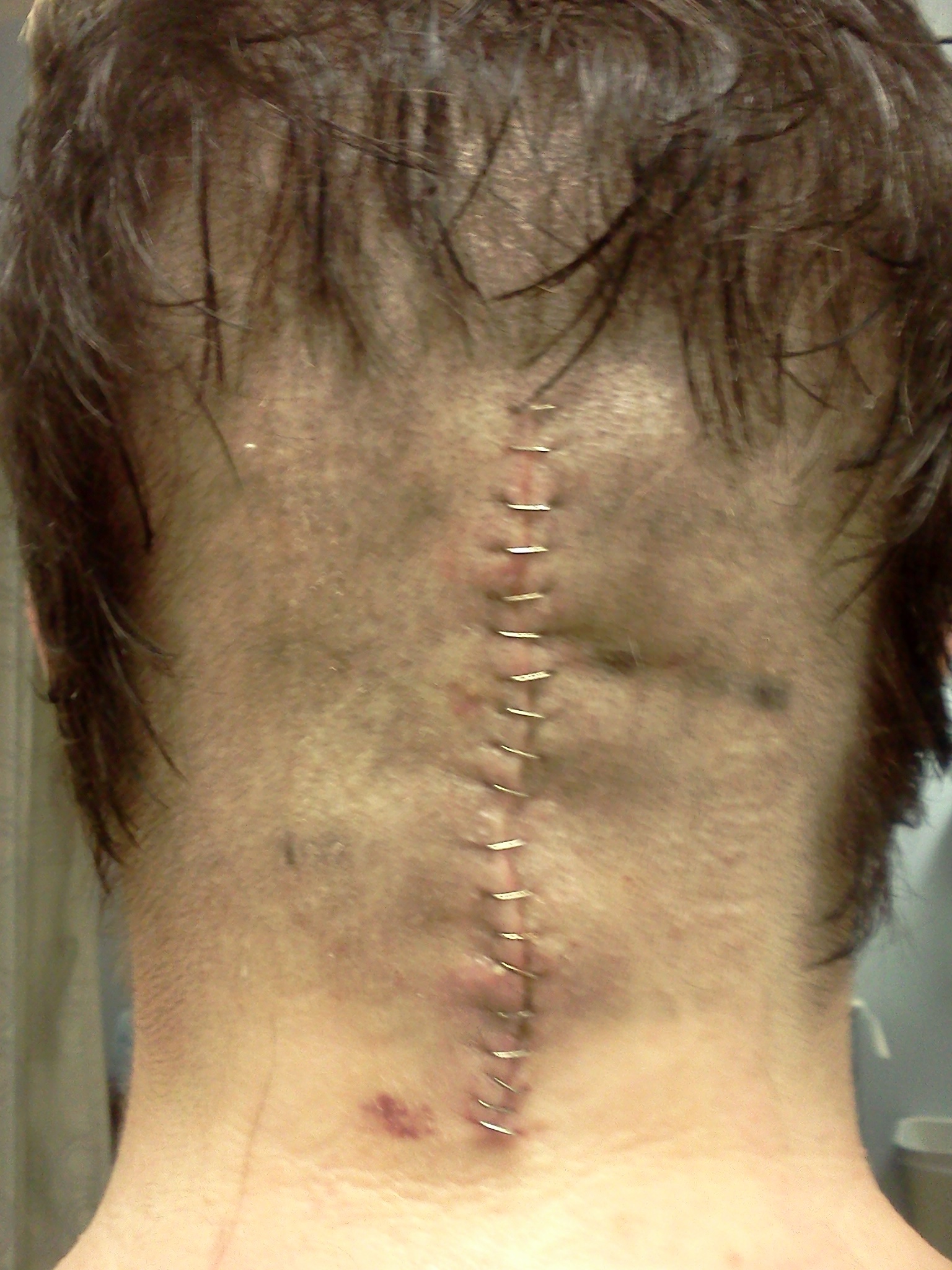 Once I got home I feel like my recovery sped up. The first night home was rough, but then I was able to get onto a good med/sleep routine and each day/night got easier. Here I am having my 10yr old measure my incision to a dollar bill 7 days post-op. 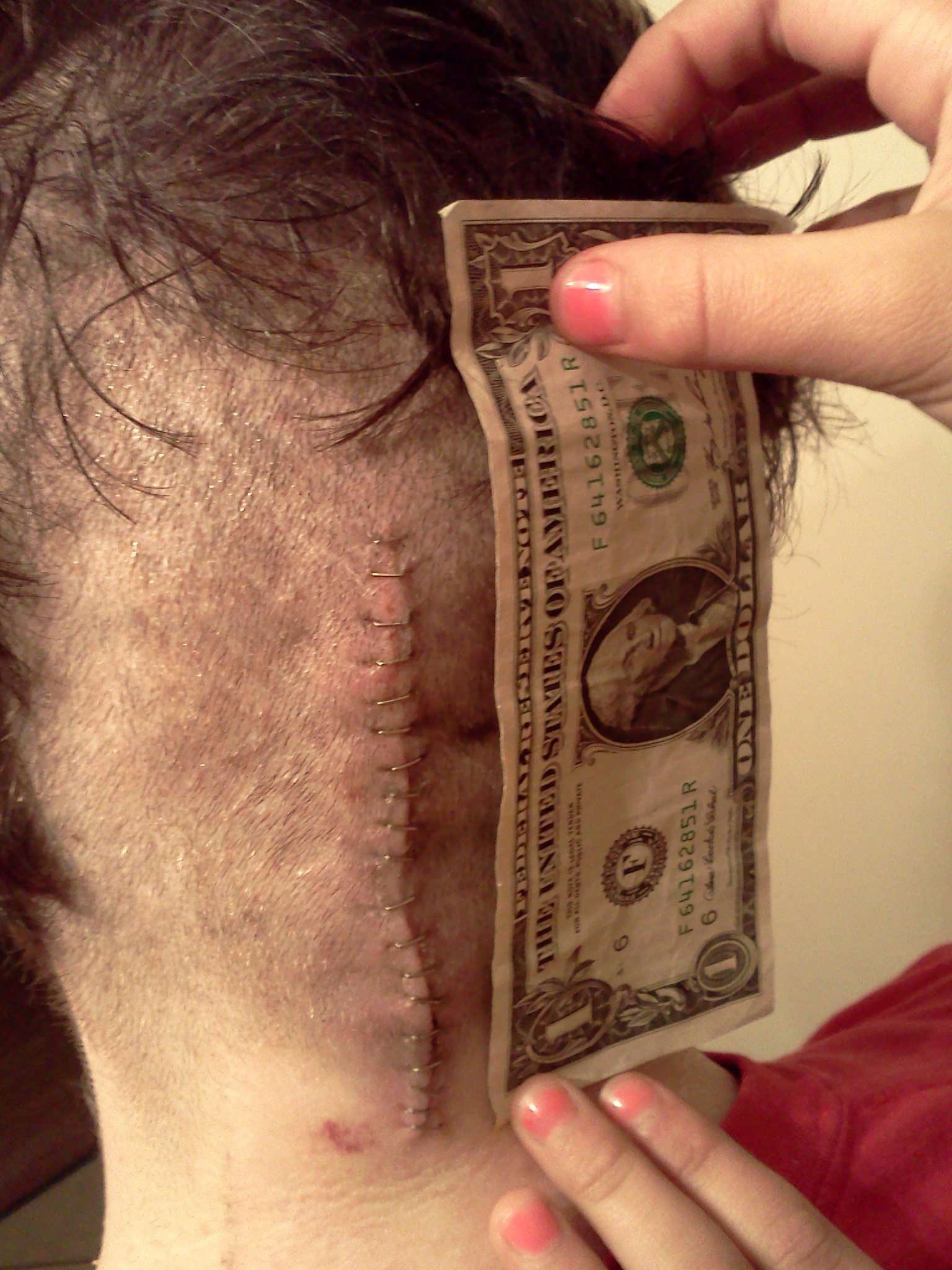 Here is another one taken on day 7 without the dollar. Excuse the hair. It was a bit crazy that first week. 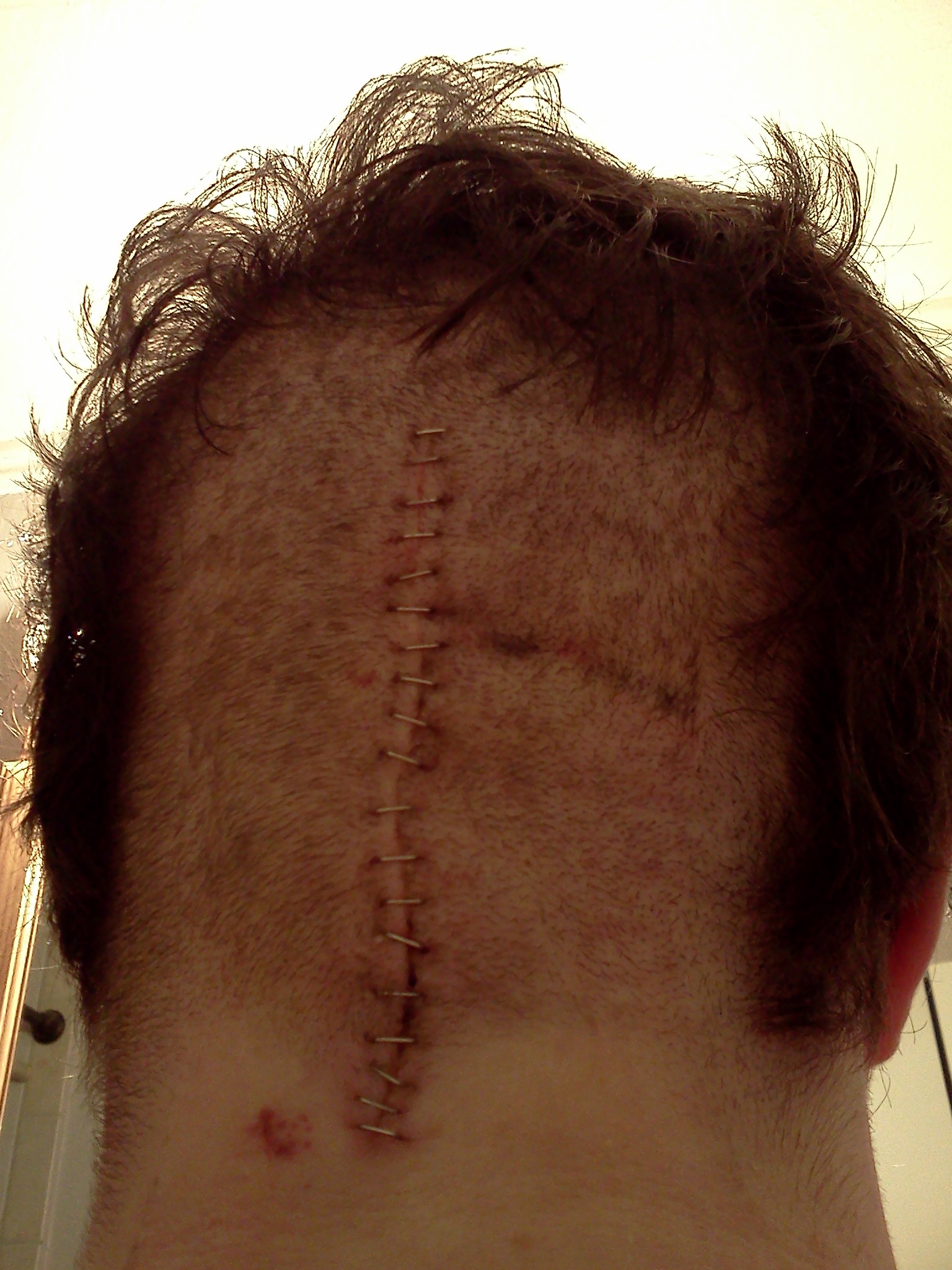 On day 9 I couldn't stand the fill of my staples anymore so I called the doctor's office to see if I could have them taken out. I was so glad they said yes and I felt so much better once they were out. 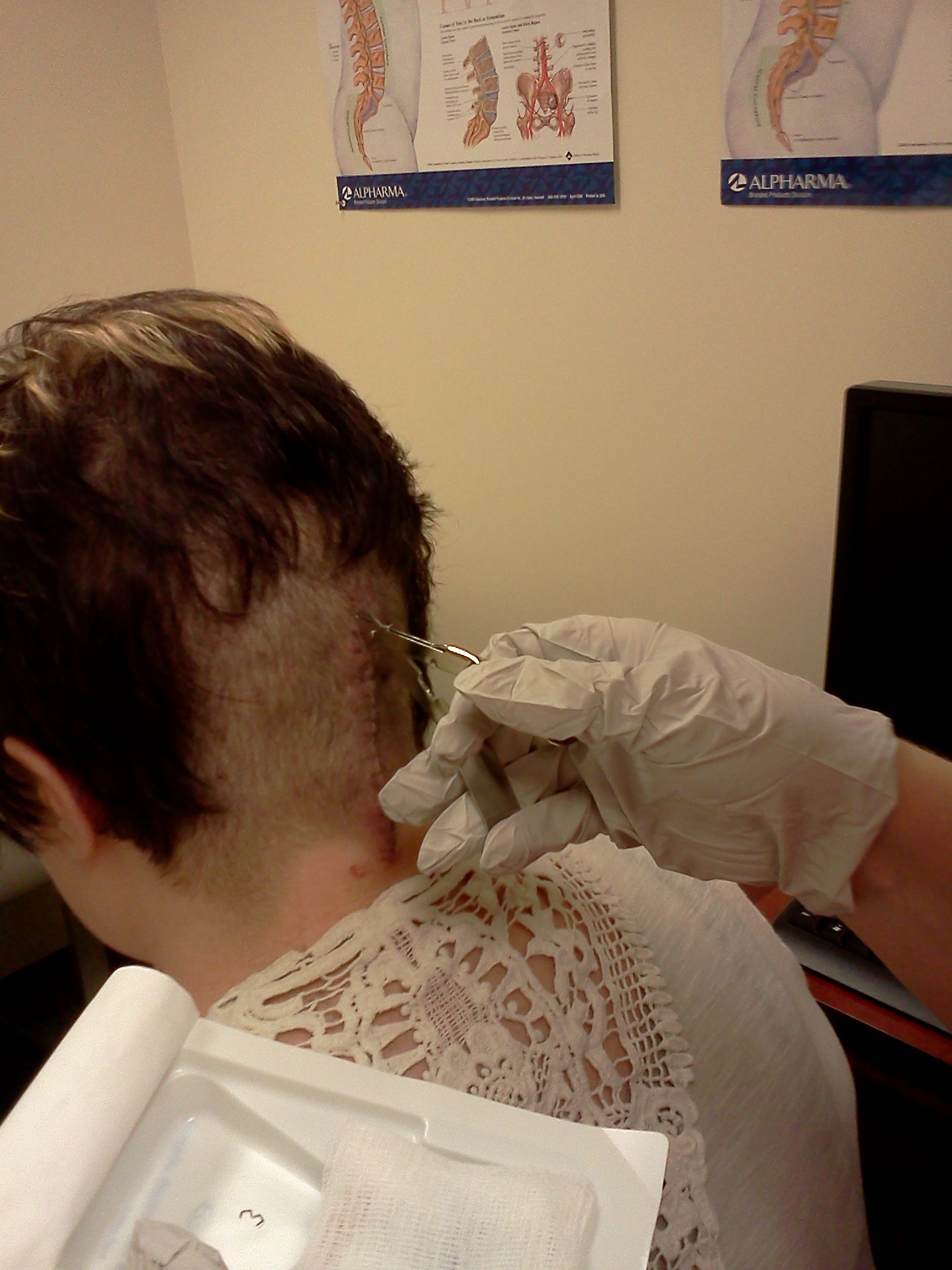 My cute hubby thought it would be fun to take a picture of my face while the nurse was removing the staples from one of my tender spots. Although it was uncomfortable to have some of them taken out, it really wasn't that bad. 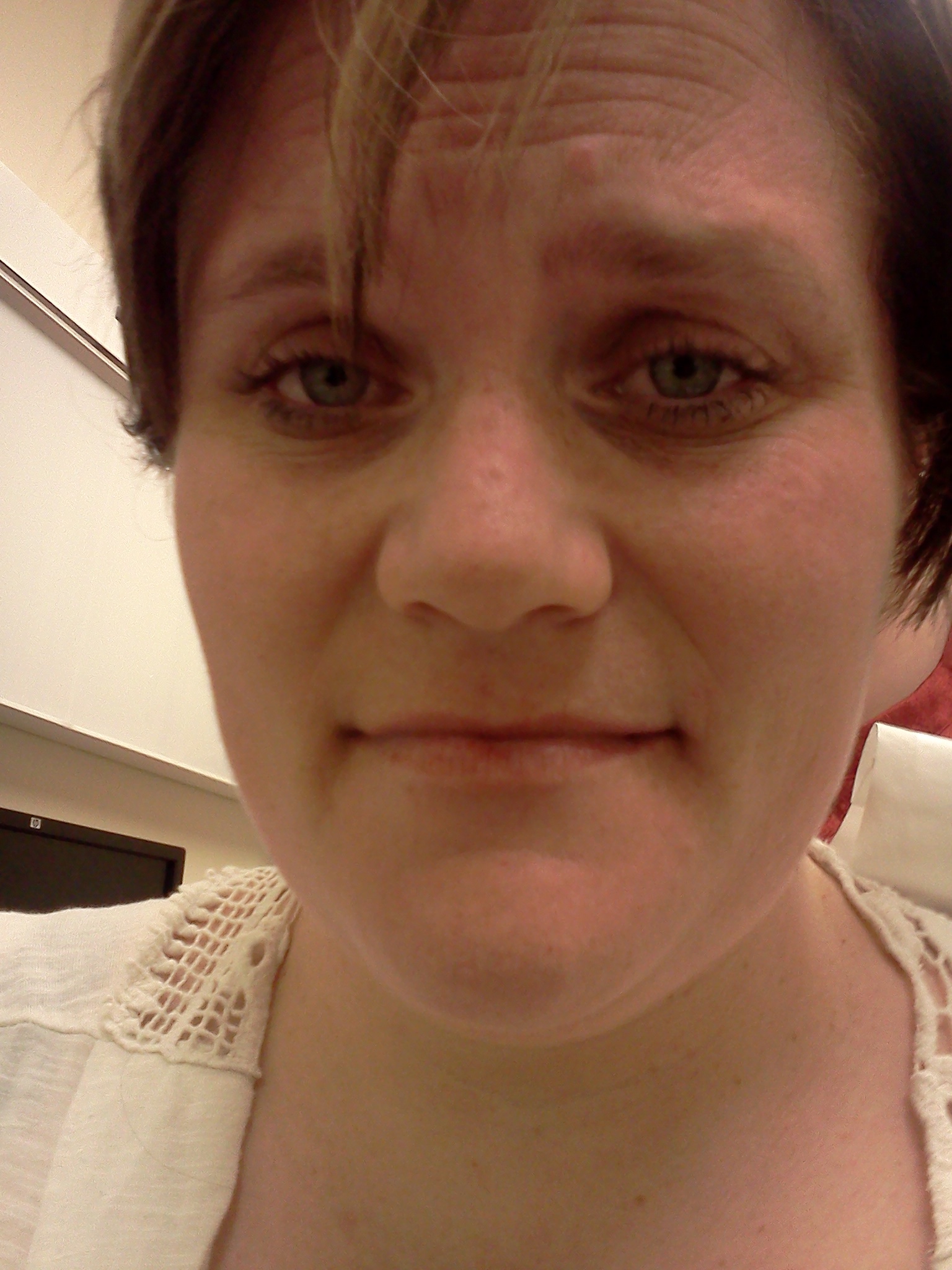 This was my tender area and still is tender to this day. 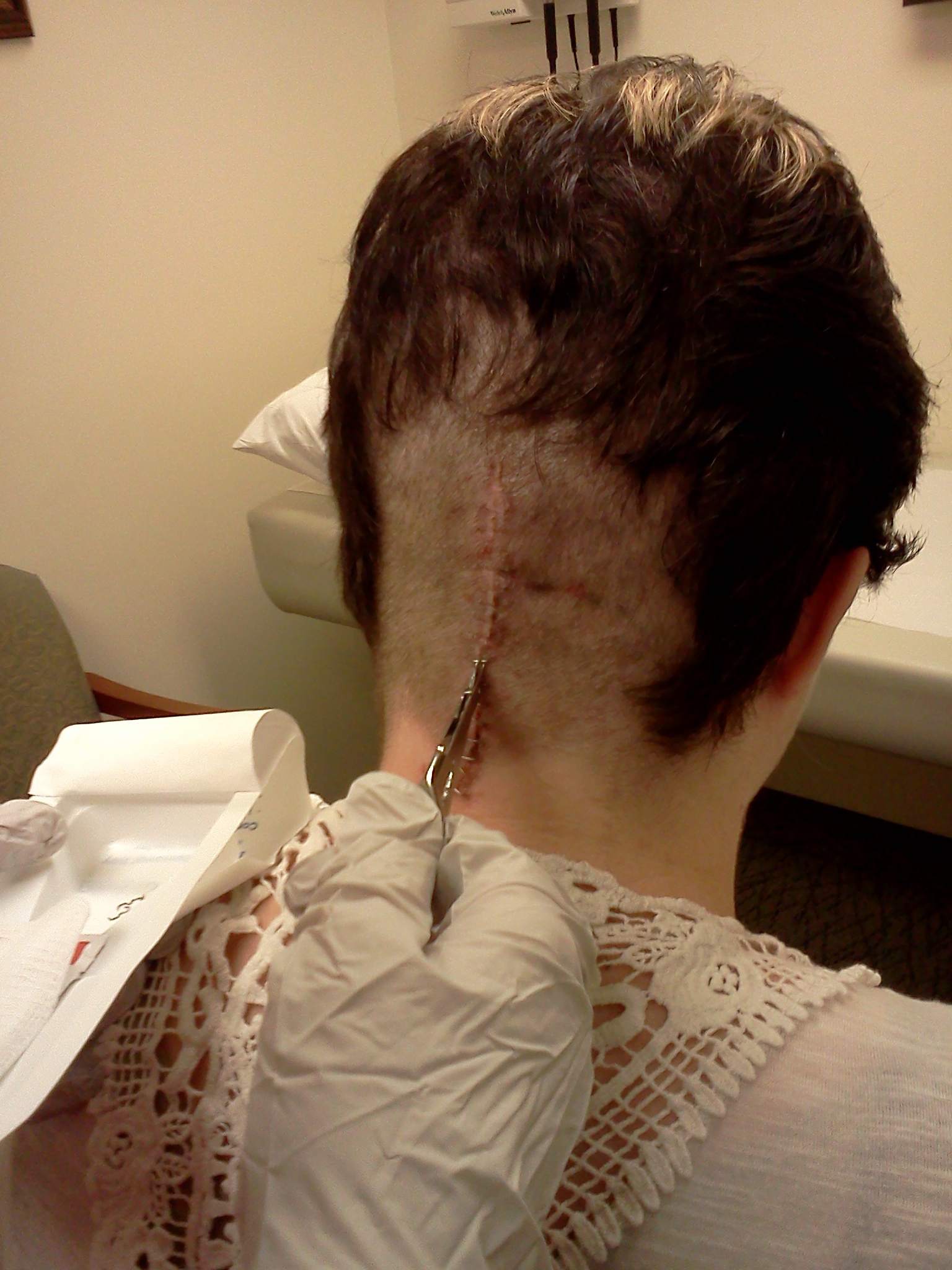 Here is a picture on day 10 just 1 day after having my staples removed. Make sure to keep the incision nice and moist for those first few days. 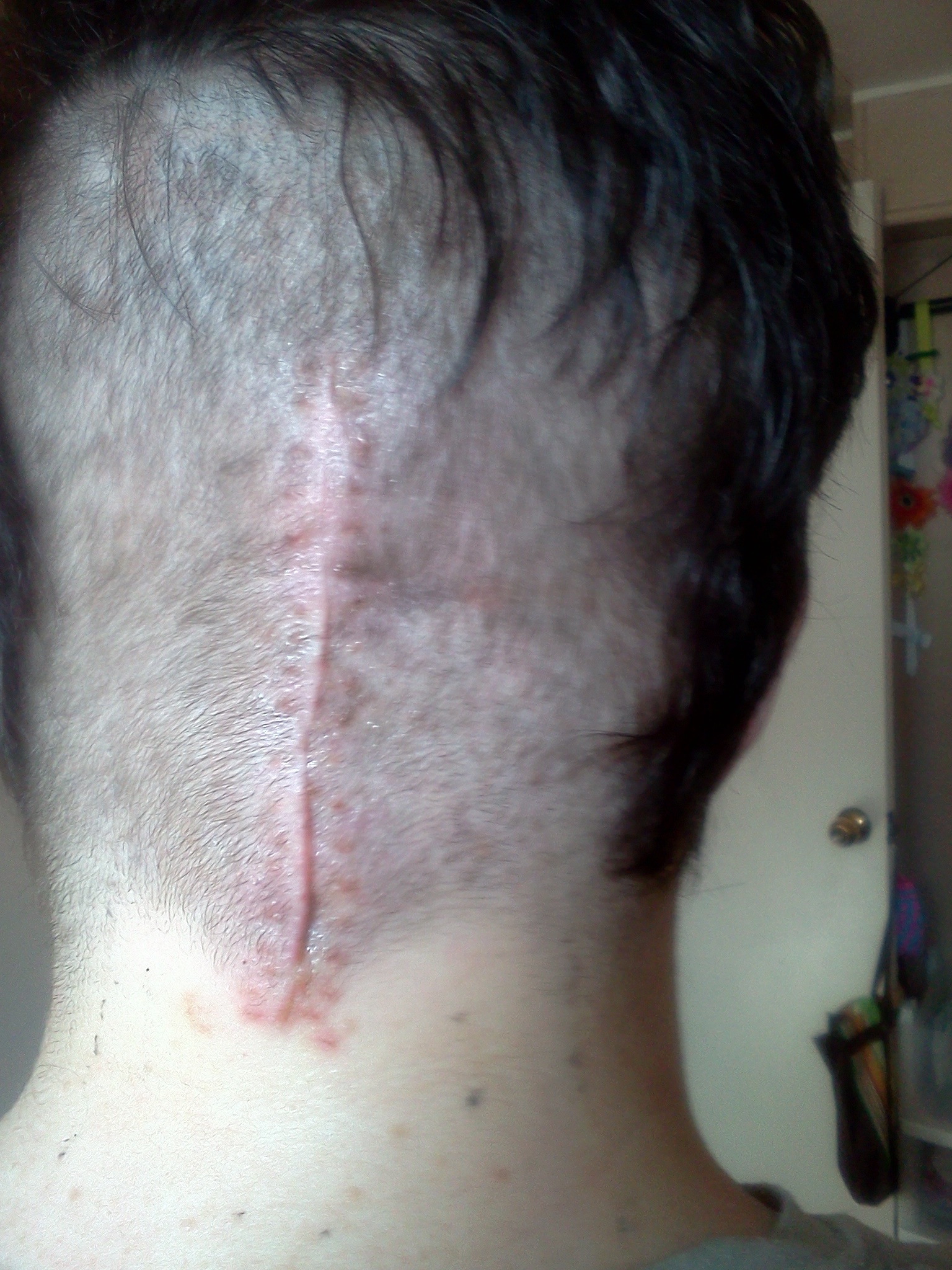 This one was taken today, day 12. I am feeling really good about how nicely it is healing. My hair is coming in pretty quick and pretty soon you won't be able to even see my incision. At least I hope not. 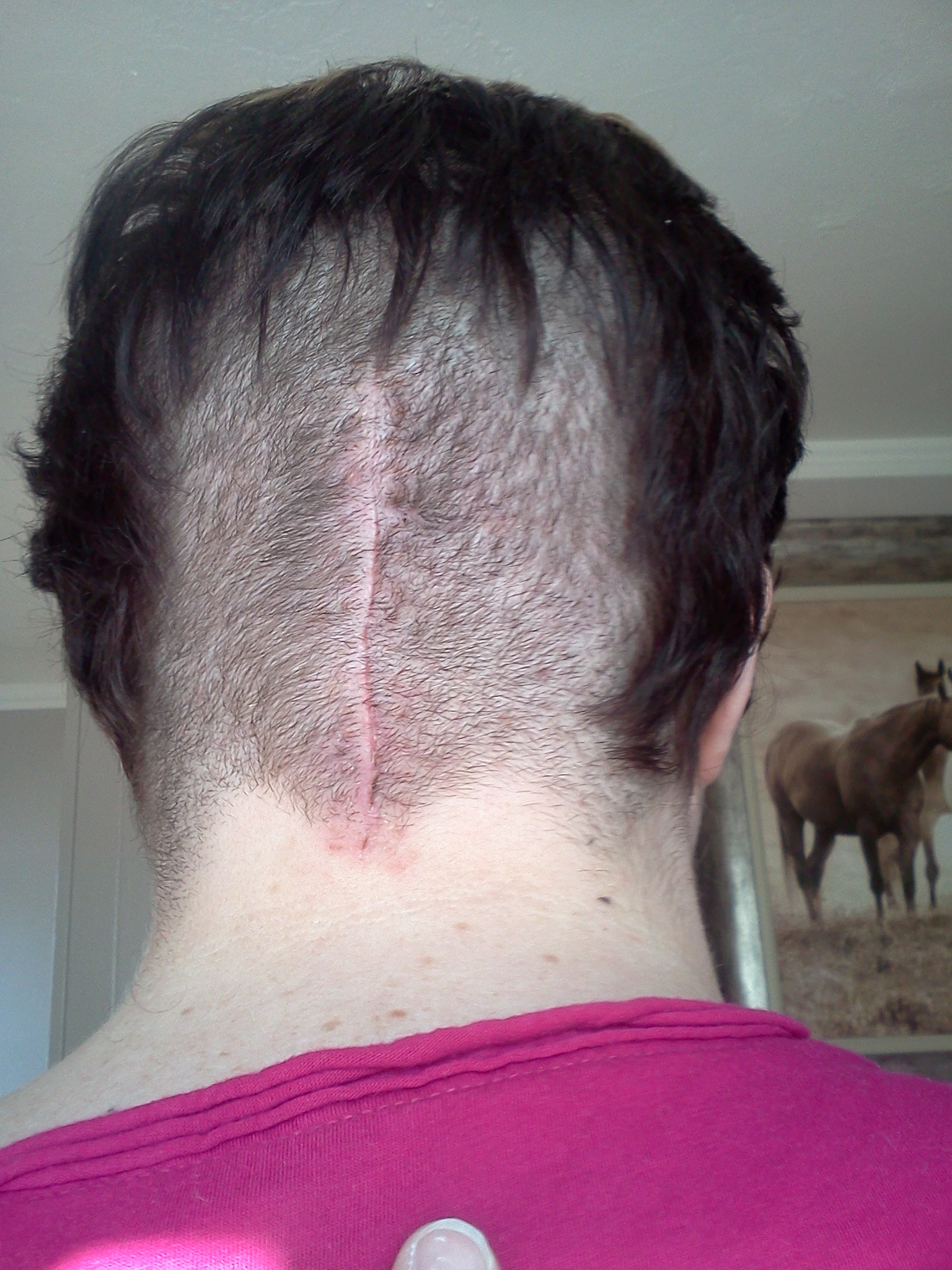 God Bless You Michelle!! I hope and pray you continue to heal and that each day you will get better and better. Boy did you have a long incision!! You're amazing, so happy all is going well for you.

Thanks for sharing these pix..you look great..glad you are healing well..be sure to rest though!!!

Wow! I can't believe how many typos I had made! I must have been high on pain meds....LOL Thanks for the comments. I really am taking it easy. Today is one of those days where my neck wants to spasm a lot, so here I sit/lay in bed "enjoying" them. Beeba I can't wait for you to do you picture walk for us all. It really is nice to have friends out there that know exactly what I'm going through and can share their battle wounds too!

Thank you for sharing all the pictures! I’m so glad to hear that you’re doing as well as you are:)

Beeba I know personal preference plays a big role as to which one they go with but stapling is quicker and usually more accurate than hand suturing. Staple lines (the holes made from staples) are less likely to leak blood than suture lines. Well and the head bleeds a lot when cut! I hope that helped to answer you question.

Wow! Congratulations for being on the other side of things. Your scar looks great! Your surgeon made a pretty one. So glad your doing better. Can't wait to hear all the updates.

im very happy for ur suceesful surgery!. u seem to b recoverin well...feel better

Wow. Stories like that make me a lot less afraid of the next steps. Thank you for sharing, and it looks like you're healing great! Congrats!!

I am so glad things are going well for you! My surgery is in May and I am so nervous. It’s nice to read a positive story, it help put me at ease! Thanks so much for sharing!